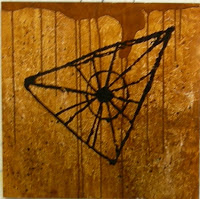 Sometimes you need to talk about your work to someone just to discover what it is you are trying to say. It happened to me twice this week. The first time, I was discussing with my husband my newer series of work inspired by my son's doodles (see post from February 8) and realized that this work relates to the petroglyphs I saw in southern Utah a couple of years ago. The petroglyphs or rock drawings were created by native people several centuries or more in the past, and often the rock's surface has been colored by minerals in the same earthy tones I have been using. I really did not think of the connection until I started describing what he was looking at. The second time, I was talking about this series with a colleague, and she noted that there was a mysterious and earthy quality. I began to describe how the doodles when enlarged became iconic symbols like an alphabet or another language. I realized that I wanted to decipher my son's cryptic (to me) language.